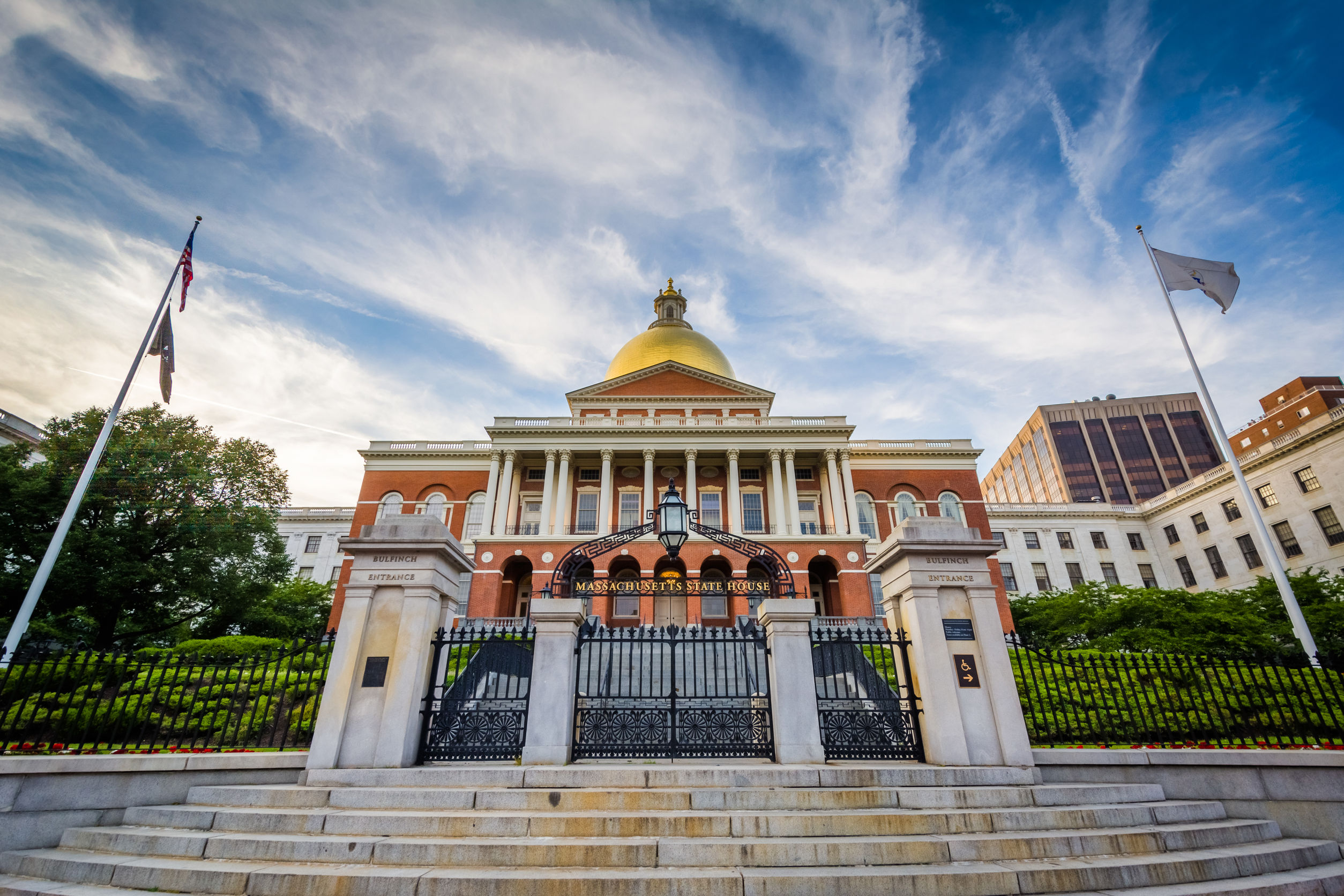 The MMBA is your voice in the mortgage industry

Each year our Lobbyist, our Legislative Committee and Board review all bills filed. We then figure out our position, prioritize and then get to work! We will meet with our federal and state legislators, attend hearings and provide written testimony. Read about our recent advocacy efforts on behalf of MMBA members below.

Take Action to Oppose H.5018, An Act to Guarantee Housing Stability During The COVID-19 Emergency and Recovery

Take action to oppose H.5018, An Act to Guarantee Housing Stability During The COVID-19 Emergency and Recovery,which seeks to extend current forberance provisions and extends foreclosure moratorium for 12 months after the state of emergency. This legislation will have severe, adverse impacts on lenders by extending recovery options to borrowers and placing the burden on the industry. Contact your Representative today and tell him/her you oppose H.5018 and agree with the MMBA position statement.

Contact your senators and representative today and urge them to ask the FHFA and the GSEs to withdraw the new Adverse Market Refinance Fee. This fee undermines both Federal Reserve policy to keep rates low, and the administration's recently announced directives to support struggling homeowners. Take action in 30 seconds by filling out this form.

Take Action to Oppose HD.5166 and S.2831, An Act to Guarantee Housing Stability During The COVID-19 Emergency and Recovery

Take action to oppose HD.5166 and S.2831, An Act to Guarantee Housing Stability During The COVID-19 Emergency and Recovery,which seeks to extend current eviction and foreclosure moratoriums as well as mandatory forbearances for 12 months after the state of emergency. This legislation will have severe, adverse impacts on lenders by extending recovery options to borrowers and placing the burden on the industry. Contact your legislators today https://www.votervoice.net/MBA/Campaigns/75990/Respond.

As we get further along in the COVID-19 pandemic, we need to have our voices heard regarding three important issues: interior appraisal inspection relief, failure to purchase closed loans and additional liquidity. We face a lack of support from the FHFA, Fannie Mae and Freddie Mac. We sent letters to all Massachusetts federal Senators, Representatives, the FHFA and the media on April 9. We need you to get involved as well! The mission of Fannie Mae and Freddie Mac should be more than just words on their website. They need to take responsibility and help consumers, mortgage lenders and servicers NOW.  Find out how you can help.

The MMBA attended an 8-hour hearing at the statehouse on January 14. Over 800 consumers and housing advocates testified for tenant rights, rent control and transfer taxes. The MMBA submitted written testimony on 12 bills and in our allotted three minutes provided verbal testimony on the issue of transfer taxes.

As required by Dodd-Frank, the CFPB was required to ask the industry for its response to TRID and how well the disclosures are meeting or falling short of enhancing the consumer's understanding of their loan and closing terms. The deadline for commentary was January 21st. The MMBA submitted commentary based upon your feedback.

The MMBA submitted testimony to HUD in late October that provided feedback in response to HUD’s Notice of Proposed Rulemaking FR-6111-P-02 “Implementation of the Fair Housing Act’s Disparate Impact Standard” (the Proposed Rule). The MMBA noted it supports HUD’s revisions to the burden of proof necessary to prove a prima facie case of disparate impact to conform its rules to the Supreme Court’s decision in Texas Department of Housing and Community Affairs v. Inclusive Communities Project, Inc. (“Inclusive Communities”). The MMBA’s testimony urged HUD to finalize the Proposed Rule’s changes to the burden of proof for a claim in light of the standards articulated by the Supreme Court in Inclusive Communities.

Read the MMBA’s letter to HUD

MMBA’s Executive Director Debbie Sousa submitted testimony and attended the October 7 hearing on S.B. 120 An Act Relative to Consumer Data Privacy. On behalf of the MMBA’s members, Debbie asked the committee to send the bill into study for the following reasons:

The MMBA’s testimony also suggested clarifying the definition of “personal information” in the bill to match the amendments to the CCPA, which define personal information as data that is “reasonably capable of being associated with a consumer.”

MMBA Submits Comments to CFPB on the Qualified Mortgage Definition

Following the Consumer Financial Protection Bureau’s advanced notice of proposed rulemaking, the MMBA submitted a letter to the agency voicing its concerns about the impact of amending the Qualified Mortgage (“QM”) definition under the Truth in Lending Act (“TILA”) and the Ability to Repay (“ATR”) rule.

The MMBA’s comments highlighted the potential adverse impact of ending the temporary Government Sponsored Entity (“GSE”) qualified mortgage (“QM”) exemption due to expire on January 10, 2021 (the “GSE Patch”) and replacing it with a “General QM.” In its letter, the MMBA outlined the two issues of greatest concern to its members: (1) reverting to a debt-to-income ratio of 43% for general QM loans and (2) using Appendix Q’s rigid underwriting rules, originally released with the ATR/QM Rule, as the sole underwriting standard. The MMBA urged the CFPB to modify the ATR/QM by removing the arbitrary limits on the debt to income ratio and permitting the use of flexible, yet prudent underwriting standards to expand access to credit for self-employed, non-traditional and underserved credit applicants.

For more details, and to read the full text of the MMBA’s letter to the CFPB, click here.

MMBA Executive Director Debbie Sousa and MMBA members Sarah Blake and Caleb Cook from Digital Federal Credit Union testified at the September 17, 2019 hearing before the Joint Committee on the Judiciary in support of House Bill 3293, which would allow for in-person notarization. As part of the MMBA’s advocacy initiative, Debbie also provided written testimony for four notary bills.

In-person electronic notarization allows notarial acts electronically without the use of paper, however, the parties are still required to be physically present. Electronic notarization is a key component to achieve widespread adoption of end-to-end digital real estate transactions, an expectation that many buyers and sellers expect in the digital age – and which a number of other states have already implemented.

The MMBA Makes a Difference on Beacon Hill 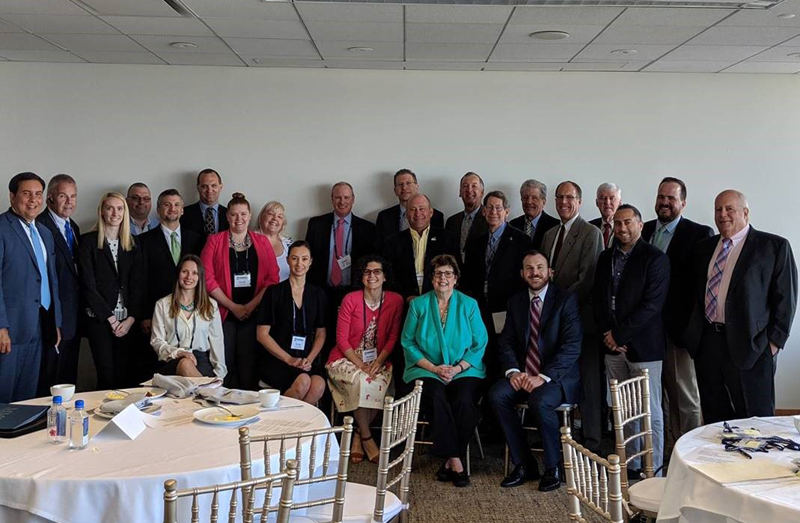 On June 12th, 24 members of the MMBA participated in the 2019 Beacon Hill Day and met with 34 State Senators, Representatives and senior staff. We discussed important legislative topics, including supporting the Act to Promote Housing Choices and the passage of An Act Regulating Appraisal Management Companies. Members also recommended implementing in-person electronic notarization. We urged our state representatives to oppose a number of bills that increase taxes on home sales to fund climate change and Community Preservation Trust initiatives. Members voiced their opposition to mandatory energy audits and scoring and provided alternative suggestions to achieve these goals while protecting consumers. MMBA members also discussed their reasons for opposing legislation that mandates judicial review, mandatory mediation and moratoriums on foreclosures. Learn more about these issues and the MMBA’s position.

The MMBA is currently tracking 150 bills that would impact the mortgage industry. It is vital that your legislators understand the impact of these bills – and they need to hear from you. Contact us to find out how you can help. 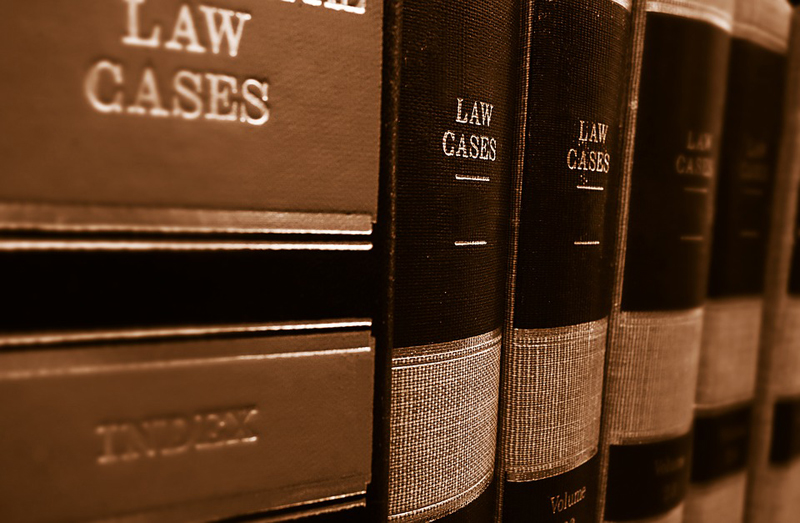 We are very pleased to announce that the Massachusetts Mortgage Bankers Association has submitted an Amicus Brief (“Amicus”) in the case of Thompson v. JPMorgan Chase Bank, N.A. in support of Chase, the Defendant/Appellee. We took this action in response to this enormously consequential decision issued on February 8, 2019 by the U.S. Court of Appeals. This case has the clear potential to create uncertainty and hardship for mortgage lenders in the Commonwealth by calling into question the validity of countless pending and previously completed foreclosures. In filing their Amicus, the MMBA joined a host of concerned organizations including Fannie Mae, the Mortgage Bankers’ Association, the MA Real Estate Bar Association and the MA Bankers Association.

The Thompson case involved the notice of default sent to the Thompsons when they failed to make their mortgage loan payments. The Court held that the notice was “potentially deceptive” and declared the foreclosure invalid. The content of the Thompson default notices exactly tracked the disclosures contained in paragraph 22 of the mortgage as required by the Pinti v. Emigrant Mortgage Company, Inc. decision and also included the mandatory form of Notice of Right to Cure a Default, the so called 35A Notice as promulgated by the MA Division of Banks (“DOB”).

The DOB form of notice in Thompson informed the borrower that the foreclosure could be avoided “…by paying the total past-due amount before a foreclosure sale takes place” (emphasis added). This conflicted with a more restrictive limitation on the right to reinstate contained in paragraph 19 of the Thompson’s mortgage, which was the FNMA/FHLMC MA Uniform Security Instrument used universally to document many loans. Paragraph 19 provided “… that the payment must be tendered at least five days before the foreclosure sale date.” This limitation was not recited in the notice of default sent by Chase and in fact is contrary to the prevailing practice in Massachusetts to allow reinstatement up until the foreclosure sale takes place. The Court erroneously concluded that Chase not the DOB, had created the (mandatory) form of notice sent to the Thompsons and went on to hold that “[o]mitting the qualification… “(in paragraph 19) “... in our view, rendered the notice potentially deceptive.”

In response to the Thompson decision, Counsel for Chase filed a petition seeking a rehearing of the case, which was allowed on March 25, 2019. The MMBA Board of Directors reflected on the gravity of the decision and decided it was important that the Court understand the unique perspective of its members, which include a broad range of local and national banks, credit unions and mortgage lenders, and the potential consequences to them and their customers if the decision was allowed to stand. Accordingly, the Board approved retention of the law firm of Orlans PC to draft an Amicus on behalf of MMBA. Upon approval by the Board, the Amicus was submitted on April 1, 2019. Click here for a copy of the Amicus.

The MMBA makes a number of keys points in the Amicus beginning with an explanation of the critical role the MMBA and its members play in supporting foreclosure avoidance efforts to help keep homeowners, MMBA members’ long-standing customers, in their homes. The Amicus explains the chaos the Thompson decision will create for members and their customers who will likely be unable to buy, sell, finance or refinance homes with an affected foreclosure in the chain of title. It points out that the uncertainty created by the decision could suppress third party bidding at a foreclosure sale resulting in more properties reverting back to the lender and increasing their carrying costs. The Amicus outlines the growth of the complex body of federal and Massachusetts foreclosure law and the strain it places on the limited compliance resources of local lenders. The MMBA argues that its members should be entitled to manage risk by relying on the use of mandatory form notices issued by regulators such as the DOB as part of their compliance program. The Amicus contends that the decision frustrates the long-standing custom and practice of Massachusetts lenders giving homeowners every opportunity to avoid foreclosure, including the ability to reinstate their loan up until the foreclosure sale. It further states that forcing lenders to cut off this right at an earlier time would be unfair to all involved and that a lender’s decision to waive this limitation in favor of a more consumer friendly option should not be construed as deceptive. The Amicus concludes by asking the Court to avoid making the MMBA’s members and their customers the inadvertent casualties of this erroneous decision.

The MMBA Makes a Difference on Capitol Hill

Nine members of the MMBA traveled to Washington, DC in March and met with Massachusetts legislators and senior policy advisers to discuss important federal issues, including: 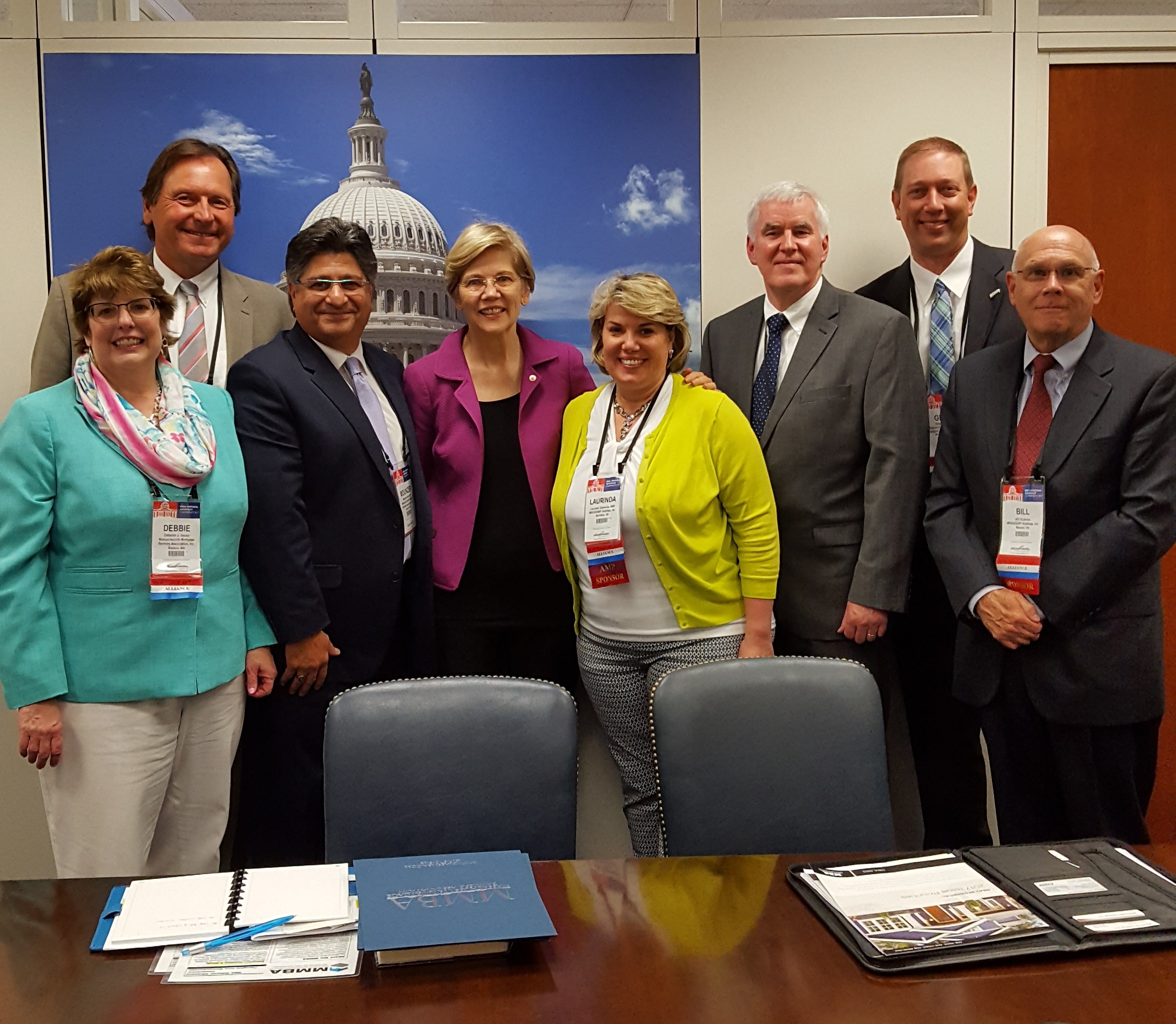